As a novice gun maker one of the most daunting parts of building a gun, for me, has been the design and fabrication of a nose cap. I’ve seen it done and I’ve had several folks tell me how to do it but until I actually laid out my tools and began to cut a sheet of brass I had no idea I could do it. I doubted the knowledge and theory in my head would translate out to my fingers. Here is the tale in an abbreviated form (it took me a week of trials to learn this).

I’m going to skip the first part, preparing the nose of the stock, except to say you have to trim down the diameter of the nose in the correct profile back from the muzzle about an inch and a half, or so, and shoulder the profile around the diameter of the stock. When your nose cap is in place it must be flush with the bottom of the ram rod channel so the rod will slide into the grove there and not scrape against the edge of the brass. The blade of a jewelers saw is exactly the right width to use as a gage when making the initial cut around the nose then clean off the rest with a good file.

Making the sleeve and end piece 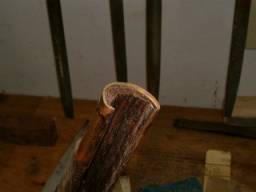 Measure the length of your nose cap from the shoulder out to the end of the trimmed wood and add a good 1/8”. Cut a piece of .032” gage brass sheet that long and wide enough to go around the nose of the stock. Anneal the brass – often. You are going to bend this piece many times to get it to fit. You are going to hammer on it and tweak it with pliers and channel locks to get it to fit. So every time you bend it a little you have to anneal it again. Doesn’t matter how many times you anneal it – you won’t hurt it unless you get it so hot it turns into a booger. When the sleeve is soft place it against the shouldered step in the stock you created when you trimmed the profile and begin wrapping it around the nose of the stock on each side toward the thin edges of the barrel channel. I wrapped the brass sheet around the nose cap space and folded the edges over the side into the barrel channel. Enlarge the photo here to see what I mean. It's OK if the edges of the brass extend into the barrel channel. That's probably a good thing because you will be truing up these edges later when you refit the barrel into the nose cap. Some extra here now lets you fit the barrel nicely later.

Important: Take care - the wood along the top edge of the barrel flat is thin and fragile and you will probably crack it bending the brass around. If that happens STOP what your doing, reach for the super glue and fix that crack right then.  The world isn’t going to fall on you for the crack but there’s no point in going on until you are working with a stable wood situation. Keep working at shaping and fitting the sleeve, annealing frequently, until you have a snug sliding fit and the top edges flow nicely and evenly around the top edges and over the wood into the barrel channel. When you have a finial fit you will have about 1/8” of brass sticking over the end of the stock when the bottom is solidly against the shoulder all the way around. Again, take a look at the picture of my sleeve fit. 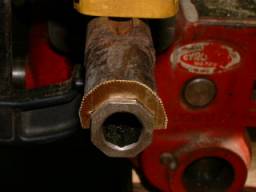 Now you’re ready to shape the end piece. Using a small square and sharp scribe lay out the barrel profile. In picture below you can still see the scribe marks where I laid out the profile. Remove everything inside the scribe marks with snips and small files, fitting and cutting like any other inletting job until the fit is satisfactory and as snug around the barrel as you can make it. While it's in the position you see in the picture hold it tight against the end of the stock and draw a pencil line on the back side using the wood as a profile guide. Then snip and file the shape down to within a frog hair distance from the line. Picture here shows an intermediate step. Also, take note of the shoulder I made in the stock where the ram rod channel becomes flush with where the nose cap will lay.

Once you have the end piece filed down to the pencil line you scribed on the back replace the sleeve and try to fit the nose piece into the 1/8” shelf you left on the end of the sleeve. This is somewhat tedious but care here is necessary because you want a tight fit between the two pieces all the way around when you solder it. Continue to file and fit,  and tap and fit until it’s as perfect as you can get it. 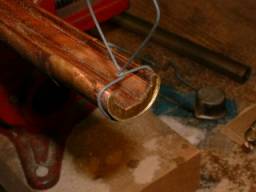 When you are completely satisfied with the way the two pieces fit together,  remove them from the stock for a good cleaning. While you have been annealing the sleeve, you have also been carbonizing it all to hell and it is dirty. Dirty brass won’t solder. When you have everything inside clean and shiny, replace the sleeve on the gun and put the end piece back in place. It should be almost a press fit all the way around. As I've done in this photo, wrap a length of wire around the cap near the end and twist it tight. At this point everything should stay in place pretty well. Without disturbing the end piece captured in the sleeve slide the whole thing off the stock. Don’t use the wire to pull with. It is only there as a temporary vise to hold the pieces snugly together. A pair of needle nose pliers worked well for me to grip the sleeve on the end where the excess stuck out and slide the entire assembly from the gun stock. 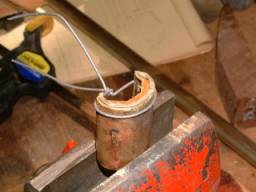 Soldering is pretty much a personal skill but I’ll tell you how I set it up. As the picture shows I set the assembly in my vise and held it with minimum pressure. I didn’t want to chance distorting the work I had. Then I buttered the joint with paste flux and laid in a strip of HyForce 44, a low temperature high strength solder I bought from Brownells. I hammered a piece flat then cut it lengthwise in half. This gave me a very narrow flat ribbon to work with and I didn’t goober up the joint with a lot of excess solder. I played the heat as evenly as I could around the outside of the sleeve about half way between the vise jaw and the top of the nose cap letting the heat creep up the sleeve to the solder. When the solder flowed I pulled the heat off and that was it.

Except for installing the nose cap rivet through the stock, the rest of the work is filing and finishing. I cleaned the excess brass and solder off the face of the nose cap before installing it back on the stock. After I put the rivet in place I cleaned off the entire cap, sat back and admired my work. I guess as a first time effort I was pretty lucky. I really have to look hard to see the soldered seam at the front edge. Here are a few pictures of the finished item. 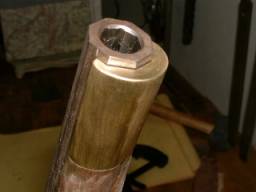 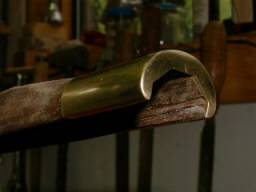 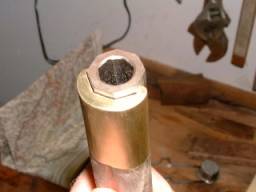 This article is Copyright 2002 by Jerry Crawford and is published with the permission of the author .